How To Use Your Trucks To Promote Your Business

In today's crowded market place, it has never been more important to standout from your competition. Doing so has, in many ways, become increasingly difficult. With an avalanche of digital and mobile technology demanding our attention, billboard advertising remains a highly effective yet expensive form of attracting potential customers. Without a doubt, every size business would love to have the advertising budgets to carry out billboard campaigns. In reality, most small to medium size businesses have no such luxuries.

The good news is that recent advancement in Fleet Graphics technology has made it possible to turn ordinary truck fleets into rolling billboards. Many small businesses have discovered the awesome power and versatility of using their existing trucks to promote and advertise their brands. Here are 3 easy ways to use your existing trucks to promote your business: 1. Park Your Truck in Strategic Places. What is the point of creating an awesome marketing message if no one sees it? The most valuable aspect of a "Billboard on Wheels" is, the ability to move it around. Even the most effective highway billboard is limited in exposure to the people who drive past it in a given day. With your new Mobile Billboard, you can bring your message directly to the people. For example: a local restaurant client of ours turned their 14 foot box truck into a billboard, advertising their happy hour specials. They knew their target customers worked in small business district 2.3 miles away. Every afternoon they would park their truck on the street where all of the business people could see it while leaving work. Before the end of the 2nd week, they had increased their Happy Hour revenue by 42%. They also realized an overall revenue increase of more that 28% due to happy hour customers returning for lunch. I would say that was pretty effective! 2. Use your Trucks for Special Events. Does your company promote your brand through Special Events? Many small businesses use community events such as Local Fairs, Holiday Festivals, and Charity Fundraisers to spread the word about their product or service. Having the ability to display your truck billboard with a specific "offer", will greatly increase your interest with potential customers. Having your own large billboard on site will attract a lot more eyes than a folding table and some balloons. 3. Park your Truck Outside of your Business. How amazing would it be to have a giant billboard in front of your business alerting potential customers of your exact location? I don't believe there is a single city that would grant you a permit to build such a billboard. However, you can "billboard" your truck and park it front of your business to add thousands of new impressions weekly. If people can't find you, they can't do business with you. Solve that problem once and for all with your "billboard truck". There is one final point about trucks and advertising that I would like to leave with you. The one feature that makes a Billboard so valuable, is the ability to create and change advertisements as needed. It would make little sense to spend large sums of money for a billboard containing only your logo, that you could never change. Although outdoor advertising is great at attracting attention, an effective billboard has to be compelling and relevant. You must be able to quickly and inexpensively adjust your message to make the most of your exposure. Until recently, that was not possible using only Pressure Sensitive Vinyl (Truck Wraps) on your fleet. The expense involved with installing and removing truck wraps, made the idea of changing your marketing message nearly impossible. Luckily, today's expanding graphic options (mainly Frame and Banner), and the low cost associated with them, make using your fleet as a viable advertising medium a reality. The only question that remains is; when will you "billboard your fleet"? If you would like to learn more about how our EZ-Change Fleet Graphics can help your business attract more customers, Click below to download our Free E-Book:

How To Use Your Trucks To Promote Your Business

Are Your Truck Graphics Reaching Their Full Potential?

The #1 Way To Get New Customers For Your Business

Is The Condition Of Your Fleet Costing You Customers?

The Real Cost Of Truck Wraps 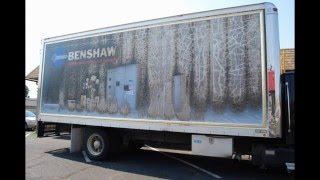 This Simple Tip Could Save You Thousands on Truck Graphics

7 Secrets to Creating Wealth in America